At the start of the year, my office friends and I were looking forward to a nice summer getaway but all seemed to be in a drawing board due to our busy schedules. After one failed plan to another, we finally set foot in Baler, Aurora which is a five-hour trip from Manila last weekend. Yes, our summer getaway happened in June!

Although we were a bit worried a few hours before the trip because of typhoon ‘Butchoy’, a lovely sunrise and a sunny weather welcomed and greeted us on Saturday morning.  Together with Pao, Liz, Hoshi and our two Brazilian office mates Marcus and Daniel, we wasted no time and headed for a day tour after having our breakfast at Bay’s Inn.

We were supposed to start the day learning the history of Aurora by going to the famed two-storey museum, Museo de Baler, but unfortunately it was closed for renovation. But what’s attention-catching is the statue of former President Manuel Quezon which appears to be greeting visiting tourists and onlookers. It’s a fitting tribute to the former who was born in the province. The façade of the museum is also emblazoned by sculptures depicting the Philippines under the Spanish era. We also got a close look at the General Douglas McArthur car which was actually made for Quezon by General Motors of America but was used by McArthur on his tour of duty in the country. In 1976, the black vintage car was eventually turned over to the Philippine government.

We tried visiting another museum, the Aurora Aragon Quezon Replica House but it was also close when we dropped by.

Our next stop is in this Balete Tree Park which according to the locals is 600 years-old and is the tallest of its kind in the country. Liz, Marcus, Daniel and I found the courage to climb it guided by the Baler kids and were successful doing so except for Liz who bailed out halfway through.

One great challenge: a 45-minute trek to Ditumabao Falls or also known as Mother Falls. If you’re not used to trekking or long walks under the scorching heat of the sun then this would really pose some challenge. We found ourselves hopping from one big rock to another, crossing rivulets and whatnot but at the same time you’ll feel one with nature. The trek is worth it because the falls is truly breathtaking. 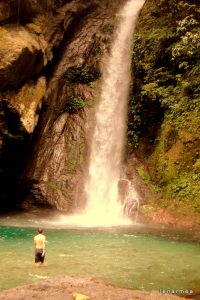 The Ermita Hill also known as Ermita Park provides a scenic view of the vast ocean and striking coast brought by its hillside vantage. It has a chapel, a few gazebos and is like the better version of Tagaytay’s Picnic Grove where families and tourists can hang out and bond together. We also didn’t miss the Tromba Marina on our way to Lukso-Lukso which is a reenactment of how the locals climbed the Ermita Hill to survive the tsunami that shook the province a long time ago.

Of all the places, Lukso-Lukso is the one that left me in awe. Lukso-Lukso, which means “to hop” in English, is comprised of three islets off the coast of Barangay Zabali, Baler,Aurora. What make it endearing are the rock formations that are visibly seen especially during low tides. A trip to Baler isn’t complete without surfing! Sunday morning was all about surfing as we head to Sabang Beach (best for beginners) which is just a few blocks away from where we were staying.

Instructors from the Aliya Surf School taught us the basic know-hows of surfing and guided as all throughout our two-hour activity. Being able to stand up on a surf board facing all the waves didn’t come easy, at least, for me. Took me several tries before I was able to get the right surfing form and when I did, boy, was I hooked! We were supposed to surf for an hour but decided to extend for another hour mainly because it was thrilling!

Aliya Surf School charges P350 / hour of surfing inclusive of the surfing board and the trainer’s fee. shots by Hoshi/ Collage by Pao

38 thoughts on “Baler: One Perfect Summer Getaway by Len Armea”