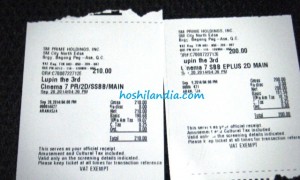 I don’t need to compare this to anime version but it’s obvious that Daisuke Jigen ( portrayed by Tetsuji Tamayama) and Goemon Ishikawa XIII (Gō Ayano) step back a little bit to give way to Jerry Yan’s character Michael Lee. I understand that Jerry has commercial value all over Asia. Probably, I also watch this because that’s one of the many factors, but if you are a guy or Anime fan I don’t think it’s really appealing.

Things You shouldn’t miss in Lupin the 3rd

Zenigata: (nagtataka sa pagbabago ni friend)  What happen to you?

Old  and retired officer/ Friend: I have an overweight wife and 2 daughters, that’s what happen to me.]

Parts you should forgive to enjoy Lupin III