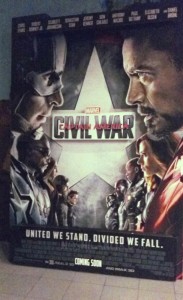 How an Iron Man  fan takes a movie where her favorite Marvel Hero is  one of the villains of Captain America? Why Tony Stark clashes with her Chris Evans? Well, these are my interests why I watch Captain America: Civil War.

Before Marvel Cinematic Universe emerge, I was an avid fan of Spider-Man starring Tobey Maguire.  When Iron Man came, it introduced me to a new comic hero and tarann… Robert Downey Jr.   Yeah I also didn’t know about Captain America, Black Widow, and Hawkeye. However, I am aware that Evans played Human Torch in Fantastic 4. However I like him more in Push.  So let me clarify, I am not familiar with the comic thing, I like Iron Man because of his wacky  and heroic nature and RDJ’s portrayal, and I like Chris Evans more than Captain America. Spoiler? I hate giving spoilers charr!

Things I didn’t get or I like on Civil War